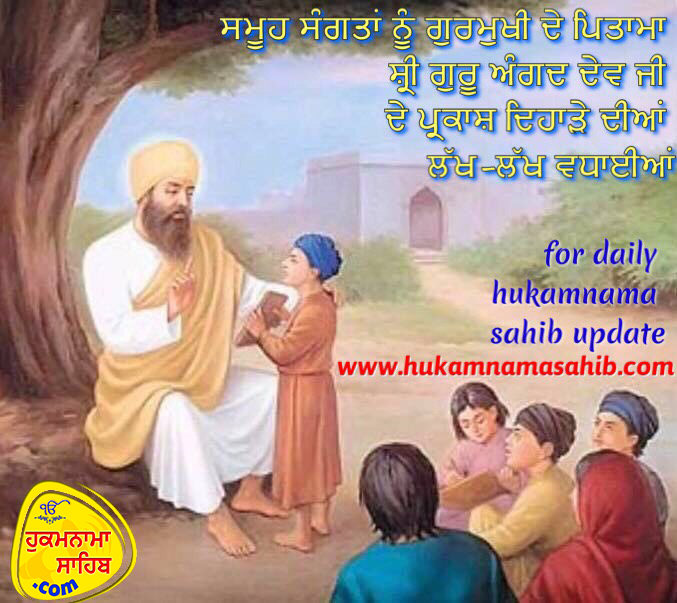 Team hukamnamasahib.com wishes you all

Guru Angad was born in a village, with birth name of Lehna, to Hindu parents living in northwestern part of the Indian subcontinent called the Punjab region. He was the son of a small but successful trader named Pheru Mal. His mother’s name was Mata Ramo (also known as Mata Sabhirai, Mansa Devi and Daya Kaur). Like all the Sikh Gurus, Lehna came from Khatri caste.

At age 16, Angad married a Khatri girl named Mata Khivi in January 1520. They had two sons (Dasu and Datu) and one or two daughters (Amro and Anokhi), depending on the primary sources. The entire family of his father had left their ancestral village in fear of the invasion of Babar’s armies. After this the family settled at Khadur Sahib, a village by the River Beas near what is now Tarn Taran.

Before becoming a Sikh and his renaming as Angad, Lehna was a religious teacher and priest who performed services focussed on Durga (Devi Shaktism, the goddess tradition of Hinduism). Bhai Lehna in his late 20s sought out Guru Nanak, became his disciple, and displayed deep and loyal service to his Guru for about six to seven years in Kartarpur.

Several stories in the Sikh tradition describe reasons why Bhai Lehna was chosen by Guru Nanak over his own sons as his successor. One of these stories is about a jug which fell into mud, and Guru Nanak asked his sons to pick it up. Guru Nanak’s sons would not pick it up because it was dirty or menial a task. Then he asked Bhai Lehna, who however picked it out of the mud, washed it clean, and presented it to Guru Nanak full of water.

Guru Nanak touched him and renamed him Angad (from Ang, or part of the body) and named him as his successor and the second Nanak on 13 June 1539.

After the death of Guru Nanak on 22 September 1539, Guru Angad left Kartarpur for the village of Khadur Sahib (near Goindwal Sahib). This move may have been suggested by Guru Nanak, as the succession to gurgaddi (seat of Guru) by Guru Angad was disputed and claimed by the two sons of Guru Nanak: Sri Chand and Lakhmi Das. Post succession, at one point, very few Sikhs accepted Guru Angad as their leader and while the sons of Guru Nanak claimed to be the successors. Guru Angad focussed on the teachings of Nanak, and building the community through charitable works such as langar.

Relationship with the Mughal Empire

The second Mughal Emperor of India Humayun visited Guru Angad around 1540 after Humayun lost the Battle of Khanua, and thereby the Mughal throne to Sher Shah Suri. According to Sikh hagiographies, when Humayun arrived in Khadur Sahib Guru Angad was sitting and listening to hymns of the sangat. The failure to greet the Emperor immediately angered Humayun. Humayun lashed out but the Guru reminded him that the time when you needed to fight when you lost your throne you ran away and did not fight and now you want to attack a person engaged in prayer. In the Sikh texts written more than a century after the event, Guru Angad is said to have blessed the emperor, and reassured him that someday he will regain the throne.

Guru Angad, following the example set by Guru Nanak, nominated Guru Amar Das as his successor (The Third Nanak) before his death. Amar Das was a religious Hindu (Vaishnava, Vishnu focussed), reputed to have gone on some twenty pilgrimages into the Himalayas, to Haridwar on river Ganges. About 1539, on one such Hindu pilgrimage, he met a Hindu monk (sadhu) who asked him why he did not have a guru (teacher, spiritual counsellor) and Amar Das decided to get one. On his return, he heard Bibi Amro, the daughter of the Guru Angad who had married into a Hindu family, singing a hymn by Guru Nanak. Amar Das learnt from her about Guru Angad, and with her help met the second Guru of Sikhism in 1539, and adopted Guru Angad as his spiritual Guru who was much younger than his own age.

Amar Das is remembered in Sikhism for his relentless service to Guru Angad, with legends about waking up in the early hours and fetching water for Guru Angad’s bath, cleaning and cooking for the volunteers with the Guru, as well devoting much time to meditation and prayers in the morning and evening. Guru Angad named Amar Das as his successor in 1552, instead of naming his surviving son Shri Chand. Guru Angad died on 29 March 1552.

Guru Angad is credited in the Sikh tradition with the Gurmukhi script, which is now the standard writing script for Punjabi language in India, in contrast to Punjabi language in Pakistan where now an Arabic script called Nastaliq is the standard. The original Sikh scriptures and most of the historic Sikh literature have been written in the Gurmukhi script.

Guru Angad’s script modified the pre-existing Indo-European scripts in northern parts of the Indian subcontinent. The script may have already been developing before the time of Guru Angad, because there is evidence that at least one hymn was written in acrostic form by Guru Nanak, which state Cole and Sambhi gives proof that the alphabet already existed.

Guru Angad started the tradition of Mall Akhara, where physical as well as spiritual exercises were held. He also wrote 62 or 63 Saloks (compositions), which together constitute about one percent of the Guru Granth Sahib, the primary scripture of Sikhism. 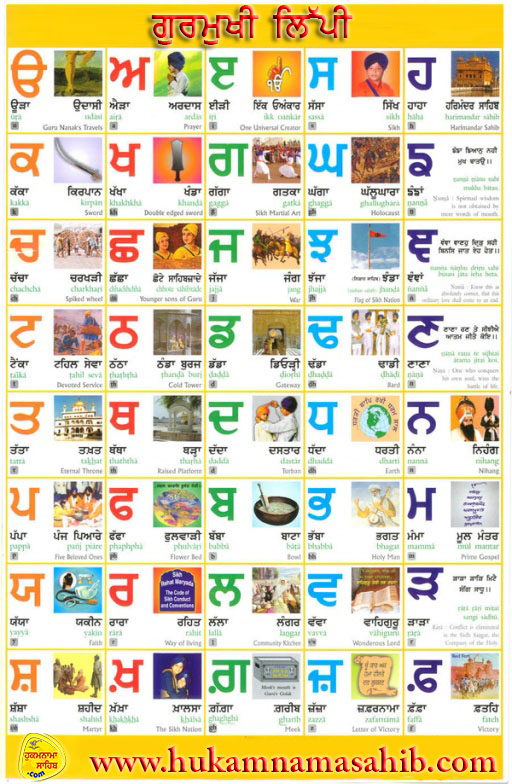 Guru Angad is notable for systematizing the institution of langar in all Sikh temple premises, where visitors from near and far, could get a free simple meal in a communal seating. He also set rules and training method for volunteers (sevadars) who operated the kitchen, placing emphasis on treating it as a place of rest and refuge, being always polite and hospitable to all visitors.

Guru Angad visited other places and centres established by Guru Nanak for the preaching of Sikhism. He established new centres and thus strengthened its base.

A person with the vision of sharing Hukamnama Sahib straight from Shri Golden Temple, Amritsar. He is a Post-Graduate in Mechanical Engineering. Currently, he’s serving the society as an Assistant Professor in the Department of Mechanical Engineering at Jalandhar. He especially thanks those people who support him from time to time in this religious act.